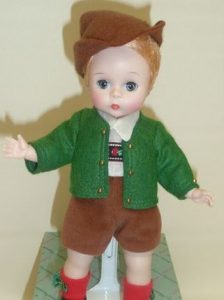 The market for Madame Alexander dolls is robust. The Alexander Doll Company was founded back in 1923 by Beatrice Alexander. She was a New York City woman who designed and sewed cloth dolls. As a businesswoman, she called herself “Madame Alexander” and came up with the smart idea to replicate famous personalities and characters in books, films, music and art. Her dolls were a hit! Interestingly, the company’s first fashion doll, “Cissy,” came on the scene four years before the iconic Barbie was released.

During the 1960s, Madame Alexander made vinyl plastic dolls and became America’s leading doll manufacturer. In the 1980s, a million dolls sold annually. Beatrice Alexander ran her company for 65 years; She sold it in 1988.

Over the years, collectors have enjoyed finding Madame Alexander dolls for sale, including “Pussycat,” the characters from Little Women, the “Wendy” doll, and The First Ladies of the United States in their inaugural gowns.