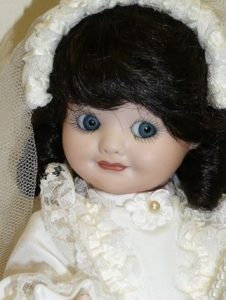 In the late 1860s, an innovation in doll making came into being– the development of bisque dolls. Up until that time, dolls were typically glazed porcelain. Bisque dolls were different because they allowed for more realistic skin tones, since they were unglazed porcelain.

Because they were and are breakable (and expensive), bisque dolls were more for admiring than for playing with– and meant for collectors. Between the 1860s and the early 1900s, bisque doll heads were popular, with leather or cloth bodies. However, composition overtook bisque as the most popular material somewhere around the 1910s. That said, bisque dolls continued to be made, and still are today. In fact, they enjoyed a resurgence in popularity in the 1980s as “collector dolls” became en vogue. Serious doll collectors usually include a couple bisque dolls in their collection for good measure these days.

If you were to look for old bisque dolls, chances are you’d find them in all sizes, from just half an inch all the way up to life-size at five foot tall. Between the late 1800s and 1930 or so, small dolls known as “all-bisque” were made. Known as “penny dolls,” they’re sought after today precisely because they’re all-bisque.

In general, bisque dolls were produced in France first (bisque is a French word), followed by Germany, the United States, and now, like almost everything else, China.

You might find a bisque doll at your local thrift shop for $5, though the most expensive ones cost tens of thousands of dollars. When looking to buy a bisque doll, the bisque should be slightly translucent and not too chalky or heavy. Eyelashes and eyebrows should be finely painted and bisque shouldn’t have too many black flecks or pin holes. Look for well-accented lips and cheek blush that’s neither heavy nor blotchy. FYI: Collectors tend to prefer bisque dolls on jointed composition bodies because this allows for more posing possibilities.

See this page for details: Should you have any questions about bisque dolls, please email questions@gigisdolls.com or call 773-594-1540.