Do you remember playing with paper dolls when you were little? Have you ever wondered how they came about? Let’s take a look back and cover a bit of the history behind the paper doll.

First things first: let’s get specific. According to The Original Paper Doll Artists Guild, a paper doll is any doll that is printed or drawn on two-dimensional paper, with accompanying clothing meant to be worn by the doll. Whether the doll is in the shape of a person or an animal, or some inanimate object for that matter, is irrelevant.

Paper dolls in some form or another have been used in many cultures across the globe dating as far back as the year 900, when Japanese purification ceremonies used paper figures as a part of the ritual. Puppets and similar toys can be considered a precursor to paper dolls, in that they existed before the invention of modern-day paper, and so took the place of the paper doll in many cultures. The closest paper relative to the paper doll is the French “pantin” – French for “figurine” – which were jointed paper figures used by middle- and lower-class adults to poke fun at the aristocracy in the late 19th century.

The first paper doll as we would expect one to look actual hit the scene in the earlier part of the 19th century, however. Created in London in 1810, she was named Little Fanny, and was produced by S&J Fuller. The first American paper doll followed Little Fanny a few years later – Little Henry of The History and Adventures of Little Henry produced in Boston in 1812.

According to Collector’s Weekly, the popularity of paper dolls grew significantly through the mid-20th century, with printing advancements. The founding of the McLoughlin Brothers Co. 1828 helped push paper dolls into homes across the nation, and eventually became the largest paper doll manufacturer in the world. Dolls were made to look like celebrities, and comic strips contributed to the creation of characters who became household names, like Fluffy Ruffles. Later, McLoughlin Brothers was purchased by Milton Bradley, the maker of many popular board games.

While paper dolls began to fade in popularity as dolls like Barbie became more common and affordable, vestiges of these classic toys continue to appear still even today, and the original paper dolls are highly sought-after by many collectors from across the world. If you’re a paper doll collector or thinking about starting to collect some paper doll items, check out the selection of paper dolls that Gigi’s Dolls has to offer. To learn more, stop in and see us on North Northwestern Highway in Chicago today or give us a call at 773-594-1540. 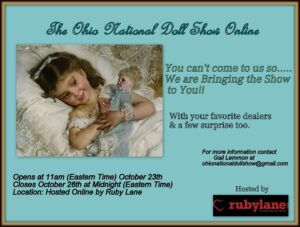 ***ATTENTION***
(UPDATED SEPT. 9th, 2020)
To All Our Customers and Friends, Due to the recent increase in Covid-19 cases, Gigi's Dolls & Sherry's Teddy Bears storefront will be closed until further notice. However, we are here and shipping orders from our website and phone orders. Please call 773-594-1540 for an appointment to pick up or drop off a repair. We apologize for any inconvenience, we want us all to remain healthy during this difficult time. Dismiss