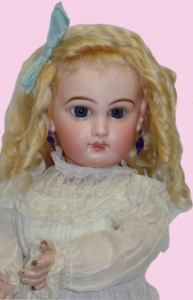 When most people think of dolls, these days, they’re probably thinking of modern day Barbies made of vinyl plastic. That said, dolls come in all shapes and sizes, made of various materials. Over the years, there have been many different materials used to create the dolls people love and cherish for generations.

Way back in time, perhaps centuries ago, the first dolls were made from carved wood. While few examples exist today, there are still a handful of woodworkers making wooden dolls– though they are few and far between.

After wood came wax… the first molded substance that doll heads were made from. So, instead of carving wood, wax got carved into a head, complete with eyes, a nose, mouth, ears, etc. As you’d imagine, wax was and is a pretty fragile material to use. So, like wood, there aren’t too many wax-head dolls in existence. Wax dolls had their heyday back in the 1700s and 1800s. Today you’re likely to find some doll artists using wax to make or enhance doll heads, though, like wood, it’s almost a lost art.

Have you heard of Papier-mâché, better known as “papier mache?” In the early 1800s, in Germany, dolls made from papier mache were all the rage. Papier mache involves the combination of paper pieces (or pulp) that’s reinforced with textiles, and bound with an adhesive like glue, starch or wallpaper paste. Toward the end of the 1800s, though, papier mache went out of style, replaced by china and bisque dolls.

Bisque dolls with a glazed finish are called porcelain dolls. The average person doesn’t know the term “bisque,” but they do know “porcelain dolls” and, perhaps, “china dolls.” These terms can be used interchangeably. China dolls are known for their pale, untainted skin tones. Typically, heads of these types of dolls are made of bisque porcelain while the bodies are made from another material like fabric. Doll collectors are often looking for antique bisque dolls made in Germany or France in the 1800s.

Before plastic “took over,” for a brief time some dolls were made of celluloid, an early form of plastic that’s both fragile and flammable. Another form of doll material– composition– had its heyday in the 1920s, 30s and 40s– and they were marketed as “unbreakable dolls.”

During the 1940s and 50s, hard plastic took over for a bit, followed by the now ubiquitous vinyl plastic. Since the late 1950s and early 1960s, most famous dolls, like Barbie, have been made from vinyl plastic.

If you’re looking for a terrific selection of vintage, antique dolls, check out all that Gigi’s Dolls has to offer.